The team at DATEV.it develops software solutions for tax consultants, auditors and their clients. Thousands of organizations in Italy and beyond are using DATEV.it applications for tax declarations, accounting, payroll, electronic invoicing, and document management.

In 2001, the Milanese tax consultant cooperative KOINOS started to collaborate with DATEV eG, Germany’s third largest software company. The joint DATEV KOINOS today is supporting thousands of customers, providing solutions for Italian tax consultants and their clients with high quality and reliable software and services from DATEV.it. Wisej was selected as the primary technology for future web projects in 2018.

Stefan Kukla, Executive Officer and Head of International Markets at DATEV eG: “Using Wisej as a base technology for our future product portfolio at DATEV.it was a very successful move: We were able to cut down on time-to-market with a much increased developer productivity while adding features and innovations that make a difference to thousands of users of the DATEV.it product line.“

Moving to the web with business requirements in mind

The existing applications are based on the Microsoft .NET Framework and DATEV.it’s product range was built with Windows Forms. About fifteen of these applications are used by tax accountants and labor consultants to help them manage all activities on behalf of their customers. Choosing a new technology stack for the web with a complex application portfolio and a large user base is not a trivial task.

Ruggero Vecchio, managing director of DATEV.it, notes: “Our applications are used by thousands of customers and are for them the main tools for their daily job. Our users have high expectations in terms of software quality, efficiency and reliability.” 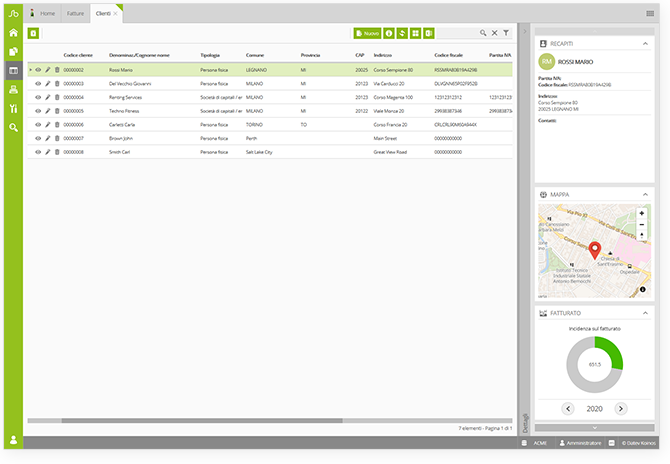 Some of DATEV’s applications consist of more than 1,500 screens to manage with all aspects of the Italian tax system. The business logic is complex and ever-changing, which requires constant adaptation and maintenance to reflect new business and legal requirements.

DATEV.it was looking for a web technology that could combine full browser support, modern usage patterns in terms of UI/UX, as well as coping with the complex demands of line-of-business applications along with great developer productivity. 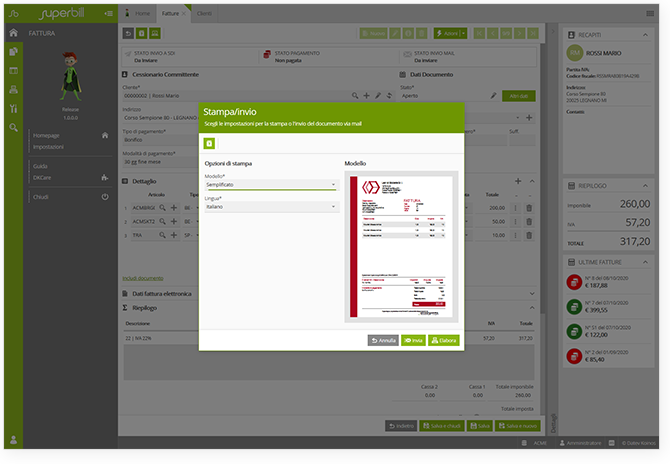 “We have been through an evaluation phase in which we used various state-of-the-art web development technologies to implement application prototypes.” explains Ruggero Vecchio.

All prototypes had to satisfy a number of prerequisites that were considered important for the kind of software developed at DATEV.it. In particular, the possibility to offer a very efficient and ergonomic user experience was key: Accountants are normally using DATEV’s applications all day long and often need to be very fast in performing data entry operations. Keyboard navigation, for example, is not always easy to handle in web applications, but this has to work reliably to support user demands.

The team at DATEV.it has experience with the traditional ASP.NET MVC development stack mixed with client JavaScript libraries like jQuery. They also evaluated structured frameworks such as Angular and React as a possible target technology for their web projects. However, none of these approaches led to promising results.

Some of the real benefits that Wisej offers, compared to more “traditional” web development technologies, became apparent at the end of the prototyping phase, when the developers at DATEV.it compared the results. The main reason was the possibility to leverage some critical advantages offered by Wisej such as:

Ruggero Vecchio summarizes the team’s impression: “The prototype based on Wisej stood out as absolutely the most advanced one: In terms of productivity we could achieve a much better result in a fraction of the time spent on the implementation of the other prototypes.” 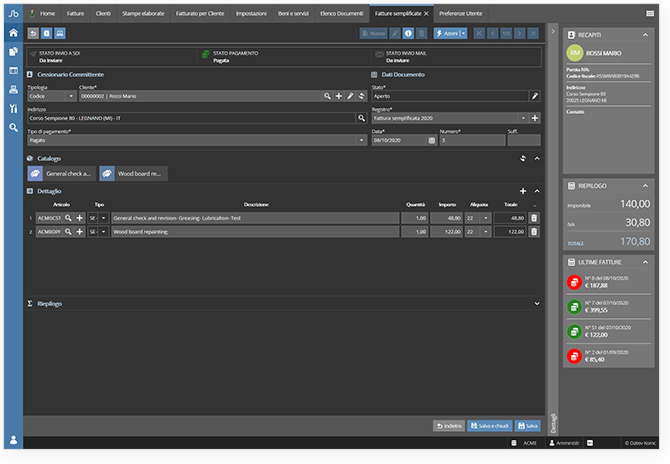 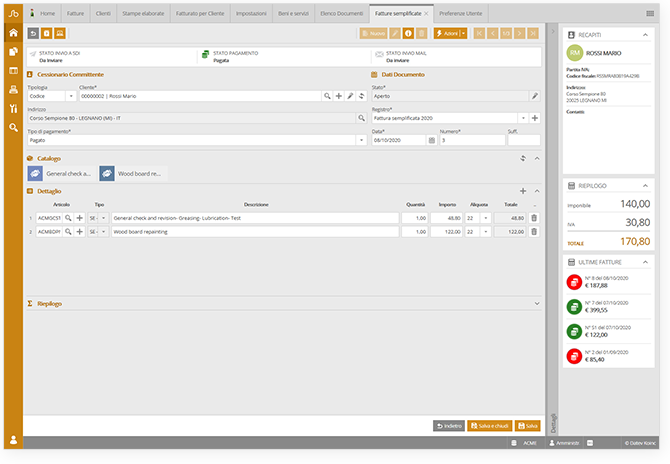 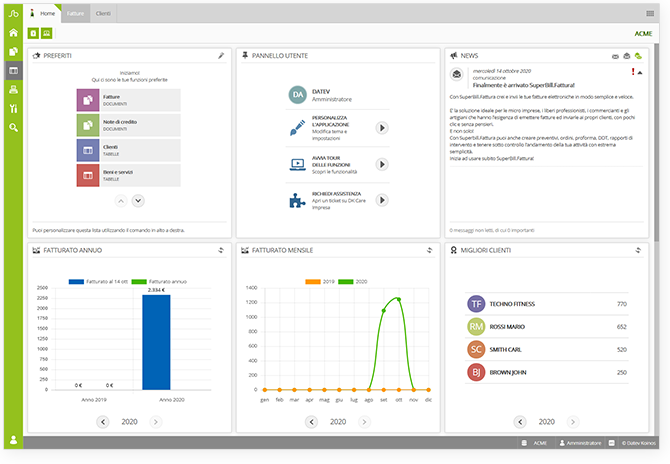 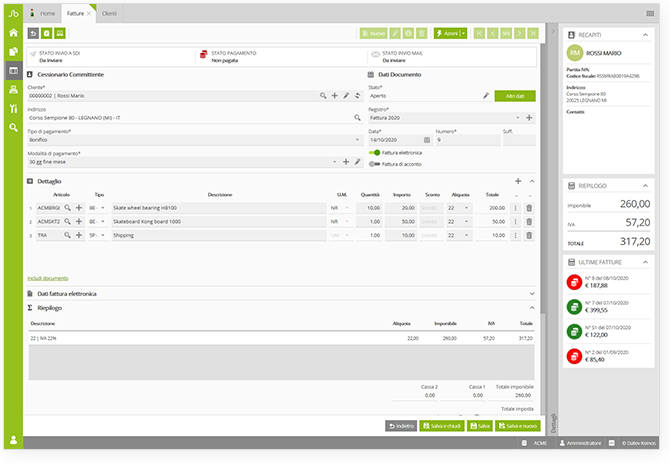 Based on the experience with the first “Superbill” project, Wisej was chosen to be the base technology for the development of the new generation of web based applications at DATEV.it. The best thing about Wisej is that it simplifies very much some of the most difficult tasks and challenges for web developers, such as achieving a full cross-browser compatibility; or implementing a reliable bidirectional client/server communication.

To get ready for production, DATEV.it conducted a series of penetration and stress testing scenarios involving external consultants. Wisej proved to be a stable and reliable technology meeting the high expectations for data protection and IT security defined for the entire DATEV group. Wisej provides a number of measures to make applications more secure and robust against some of the trickiest kinds of exploits.

The team at DATEV.it prepared a deployment setup with flexible options to serve a large number of users with adjustable scalability needs.

Wisej offers some big advantages compared to the majority of alternative development technologies for the web: it can be used as a comprehensive development tool, even for very complex applications, and offers an integrated UI designer that dramatically simplifies the design of complex UIs. When looking at the main benefits that DATEV.it enjoyed as a result of using Wisej, the developer team named a number of clear advantages:

“We are absolutely satisfied because we could maximize the results and meet all of our planned prerequisites. Generally speaking, Wisej is today probably one of the best platforms for the development of line of business software for the web.” – DATEV.it 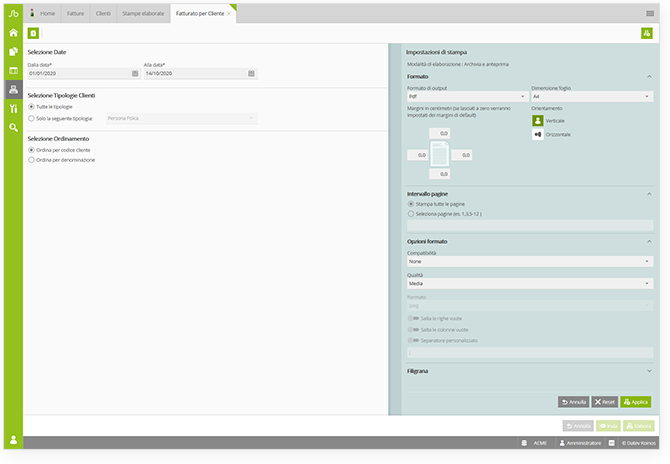 The developers at DATEV.it pointed out that Wisej is a worthy candidate for porting existing Windows Forms projects to the web; but it should also be considered as an enterprise-level development technology for projects that can be developed from scratch.

Mr. Vecchio summarizes: “I would suggest anybody to give Wisej a try; better if guided through a demo that can highlight the real advantages according to the characteristics of the development project and its prerequisites.

ITG, the company behind Wisej, supported the DATEV.it team through the Technology Partner Program which, among other benefits, gave DATEV.it access to the full Wisej source code:
“We always appreciated the way ITG supported us along our process of adoption and then afterwards during the development phase, taking into consideration our requests for new features and reacting almost immediately to issue reports or help requests.
The ITG Partner Program, we adhered to, is really meant to establish a partnership and to offer a really effective and constructive kind of cooperation.”

DATEV.it is an Italian software factory that belongs to the German DATEV group. Its mother company, DATEV eG, ranks at #3 of Germany’s largest software companies providing IT solutions and services for tax consultants, auditors, lawyers as well as their clients. These are supported by DATEV mainly in the fields of accounting, business consulting, taxes, and enterprise resource planning (ERP). DATEV eG employs close to 8,000 people with a revenue of 1,1 Billion EUR.

The software applications developed by DATEV.it are sold under the brand name DATEV KOINOS. Thousands of Italian tax advisors’ offices and their clients make use of DATEV.it solutions for accounting, tax declarations, balance sheet, office and document management, pay slips, and billing.

Ice Tea Group LLC, located in Washington DC, is a worldwide specialist for enterprise application modernization and business web frameworks. We help developers and organizations stay competitive. Our mission is to strengthen and increase the value of enterprise-scale software assets by providing modernization paths throughout technology changes.

Since 1998, our services and frameworks have been used by more than 600 companies, in 4,800+ applications, over 50 countries. Some of our clients are: Fujitsu, Goodyear, Xerox, Skanska, Volvo, Merck, GE Healthcare, IFS, Air New Zealand, CBS, SAGE, Ericsson, Siemens, ASFINAG, Markel, Ameriprise, Europ Assistance.

Disclaimer: Ice Tea Group and DATEV.it make no guarantee, warranty or representations. Any projections or estimates are opinion and do not guarantee the current or future performance of the software or represent any kind of contractual obligation on our part. You should conduct an independent investigation of the software to determine to your satisfaction the suitability of the software for your needs.