I’m trying to replace a VWG event scheduling UserControl I had created, which had a lot of checkboxes to represent the week days (7) and month dates (31+1) as well as 7 DateTimePickers (showing time only) and 7 NumericUpDowns for the start time and duration in minutes of the scheduled event respectively. A picture of the Weekly view of this UserControl is shown in the first attached.

Now, when I replaced that with Wisej, I found out that the result is much larger in both width and height. This is using the Classic-2 theme, with other themes the result is even larger. This is shown in the second attached. The reasons I have spotted are the following:

this is what we get now with updated Classic 2 theme: 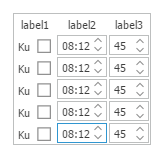 DateTimePicker now (1.2.63) supports ShowCalendar property to hide the calendar symbol if not needed.

Yes, the NumericUpDown arrows look very nice with updated Classic-2 theme. And it will be great if you included it in the built-in themes!

I also noticed that  the TimePicker arrow behaviour is now correct. Since I haven’t downloaded any newer dll, does this mean that it was fixed when I set the Format to Custom? Strange …

I have updated the themes again. Can you please give it a try ?

I´d also like to mention that Classic-2 will make it into the build in themes soon.

Is there an updated Classic-2 theme you need to upload or should I do something to show the arrows in the NumericUpDown?